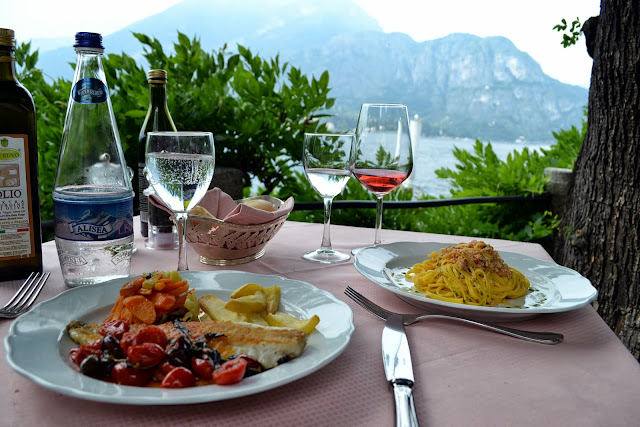 This is the first part of our travel series on the foods of Northern Italy. Later posts will cover Brescia, Parma, and Cinque Terre.

We started our trip on Lake Como, a grand body of water sitting at the foot of the Alps and lined with elaborate villas that are nestled into the mountains. A short train ride from Milan took us through long tunnels interspersed with tantalizing views of the water, a preview of great things to come. We stepped off the train in Varenna on the Eastern shore of the lake, where we embarked on a short and scenic ferry ride to Bellagio.

Bellagio is simply beautiful. The town is surrounded on three sides by water, sitting out on a peninsula where the lake splits into two. Across the way, the peaks of the Alps can be seen rising up from the lakeshores. Arrival in town is by the water and a regular ferry floats among Bellagio and the neighboring towns of Varenna and Menaggio, each visible from town and perched on opposite sides of the lake.

Although it was late-July when we visited, the town was surprisingly uncrowded, giving us plenty of room to stroll along the shores of the lake, watching the boats and listening to the sounds of the seagulls. It also gave us plenty of time to sample the excellent food.

Dining by the Lake

When it comes to lunch, the obvious choice is to sit by the lake shore eating pasta while watching the boats float by. So for the first meal of our trip we settled in at the “snack bar” at the Hotel Metropole. Not to be confused with the restaurant at the same location, the snack bar offers simple, classic pasta dishes for 9 euros and a nice selection of salads and pizzas, all served at prime lakeside tables.

A bowl of linguini al pesto was just what I wanted as a welcome lunch, the pesto light and creamy with a strong basil flavor; lighter than usual on the garlic and cheese. The classic tortellini alla panna arrived with a pink sauce, similar to vodka sauce from back home, tossed with gratuitous pieces of ham. The pastas were basic but competent, and with that location it was hard to argue with the price.

The following day’s lunch was at the restaurant at the Hotel Florence, which offers an even more perfect setting, with romantic tables for two set facing the lake under arched tree branches. Such a place easily could get away with mediocre food, but it proudly chooses not to. The fresh mozzarella was the best of our trip; rich and creamy, best eaten slowly with juicy tomatoes, fresh basil, and just the slightest hint of good olive oil. The tall bottle of balsamic vinegar placed on the table was unnecessary, but the cool glass of house rose was a nice accompaniment.

Since we were sitting by the lake, we opted for the fresh taglierini with lake fish ragu. The pasta was fresh and delicate but not too soft, and the fish was nice and meaty, giving it the texture of a meat ragu but with the taste of the sea. We thought about how hard it is to find such a light, simple pasta dish in the States, where we feel we must go more heavy on the sauce.

A wonderful fillet of sea bass rounded out our seafood lunch. It was nice and crispy on one side and tender throughout, served with a sauce made from cherry tomatoes olives, capers, and good olive oil. It came with a handful of french fries that proved their worth for going after the last of the sauce at the end.

Dining on the Stairs, Steps from the Lake

In the evenings, we sampled the fine eateries just a minute or two from the lakeside on foot. Bellagio climbs up a steep hill, and what normally might be streets and sidewalks are instead long pedestrian staircases lined with stores and restaurants. The restaurants take on an intimate feel, with dining rooms and covered patios accessible only by stairs.

One of the most inviting places is Terrazza Barchetta, which boasts great food and, as the name suggests, a lovely covered terrace. It is not without its quirks: random things hang overhead, like copper pots and a metallic skeleton of a fish. The patio is covered with faux leafy vines and surrounded by miniature Roman statutes; all silly when looked at individually, but collectively the place looks charming. Just don’t look too closely at any one thing, or treat it–like we did–as a source of entertainment.

As odd as the decor may be, the food is straight-up great. Creamy burrata was served over gazpacho, a seemingly unusual combination that turns out to be authentic. Zuppe di pesce, the classic fish soup, was filled with chunks of pink trout or salmon and a white flaky fish, served in a tomato-based broth. Saffron risotto Milanese was given a crisp sear on the bottom similar to a paella’s “socarrat”.

The highlight was a traditional dish of Bellagio: little perch fillets cooked with butter and sage and served over rice mixed with Parmesan cheese. The perch was given a light coating of egg batter and sauteed, and the rice was al dente, great for soaking up the delicious flavors of sage and parmesan. It was a perfect dish, satisfying our desire for lake fish and our love of butter and sage.

As we enjoyed our fish and rice dishes, we surveyed the scene. Next to us the members of a large Portuguese family bravely navigated through a conversation with their Italian waiter in English. Italian families nearby seemed to be regulars. To our right an unfortunate American couple chatted unsubtly, him at an appropriate volume, her several notches too high. The water wished them a “buona notte” a little too quickly on their way out. We sighed happily.

Another night, we stopped by Trattoria San Giacomo, which occupies a prime spot on a rare landing near the top of one of the staircases. The small restaurant is popular, and customers sometimes are obligated to put a name down and wait at the nearby bar to be called. We got lucky and somehow slipped in.

That was good, because it gave us the opportunity to try San Giacomo’s excellent smoked trout salad. The trout was served simply on a bed of arugula and topped with bright red tomatoes. It required nothing more than some freshly ground black pepper and a squeeze of lemon.

In addition to its regular menu, Trattoria San Giacomo also offers a menu dedicated to the porcini mushroom. This excited me greatly, because fresh porcinis have so much flavor and are incredibly rare and expensive back in the States, in part because they have to be imported from Italy. We ordered some firm polenta, which came with an uncommonly large mound of them. It was luxurious devouring so many porcini all at once, although after a while the dish became a little one-note. On my next visit I shall order them with pasta, a combination which I saw on many neighboring tables.

We happily could have stayed in Bellagio for weeks, swimming in the pool at the hotel, taking out boats, gazing at the lake and mountains, and of course eating terrific food. But we had some other ideas. After a few nights we took a boat down to Como at the foot of the lake and rented a car, driving East. We knew there was excellent food ahead.

View The Foods of Bellagio in a larger map