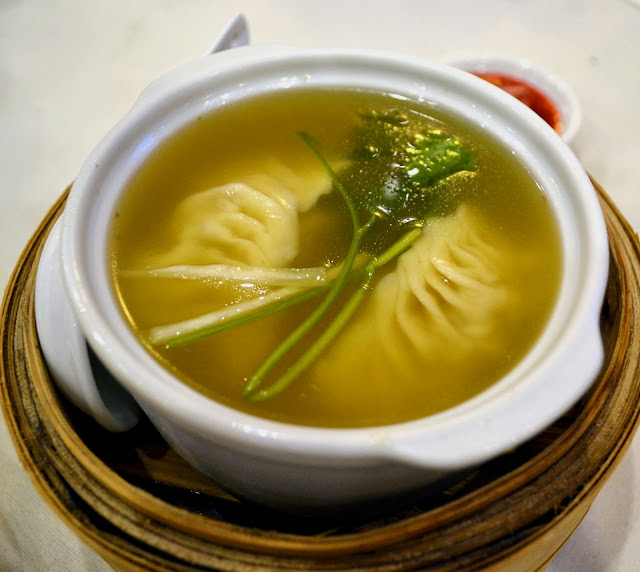 “This is not your first time,” said the older man sitting to my right. “You know what to order.”

We were at East Harbor Seafood Palace, a large and bustling dim sum hall in Sunset Park. It was 11:30 a.m. and the place was a mob scene, with big families drinking tea and grabbing morsels with chopsticks out of little steamer baskets. When our number was called we were seated at a large round table where, it turned out, we were joining a family of six for brunch.

My new friend was impressed with our bowl of sticky fried rice mixed with dried shrimp and topped with peanuts. He pointed to the television on the wall, which was showing our president at a press conference with Chinese subtitles. “Hong Kong television,” he said, “direct broadcast. In Hong Kong, the food is even better than this.”

I’m going to need to visit Hong Kong, because when it comes to dim sum, I haven’t had any better than at East Harbor Seafood Palace. It serves the same dishes as at other dim sum houses in New York, but each one has just a little more flavor, the ingredients more high-quality and fresh. Our dining companions heartily agreed.

Steamer baskets were carted to our table and we chose judiciously. There were pan seared chive dumplings with shrimp, stuffed bean curd skins, steamed pork dumplings, and my favorite: shrimp rolled up in large rice noodles and topped with a sweet soy sauce.

“What do you want to eat, Dad?” His son was trying to get his attention from the across the table on my wife’s left. He tried again, repeating himself in Chinese. His father hesitated. “Har gao,” he said finally.

I knew what that was. We had four of them in a steamer basket, shrimp dumplings with skins so delicate that you could see the pink shrimp inside. The shrimp were fresh and flavorful, needing no additional seasoning but taking nicely to some red chili paste that arrived in a little dish on the side.

But the star of the show, surprisingly, was the humble wonton soup.

It arrived with two giant, perfectly-pleated wontons, each one with a meaty filling that was light in texture but rich in flavor, mixed with large pieces of fresh shrimp. The broth had the deep, rich flavor of the best homemade chicken soup. It was served with a little dish of red vinegar with julienned ginger in it. With the guidance of our dining companions, we poured some of the vinegar into the soup, cutting the richness of the broth with the tart sweetness of the vinegar and the spicy bite of the sliced ginger.

I don’t usually say things like this, but it was the best wonton soup I have ever had.