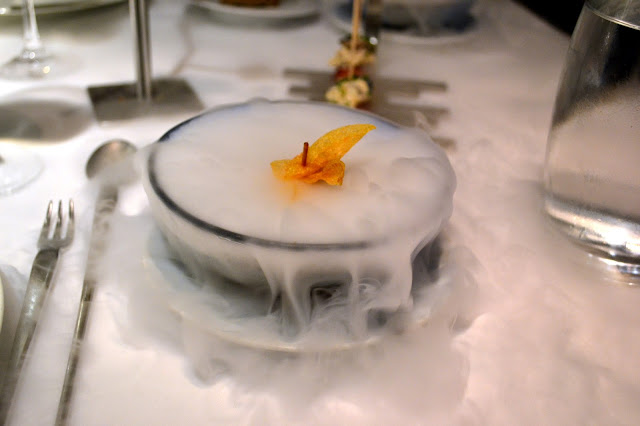 As part of our journey through the Basque Country, we had the pleasure of visiting the world renowned Restaurante Arzak, a three-Michelin starred restaurant in San Sebastian. Run by the legendary Juan Mari Arzak and his daughter Elena, it consistently ranks as one of the best restaurants in the world. Arzak is at the forefront of la Nueva Cocina Vasca, the New Basque Cuisine that has influenced chefs all over the world, including back home in New York. This is the second installment of our three-part feature on the Arzaks and their restaurant.

Fresh from our personal tour of the Arzaks’ kitchen, wine cellar, and test kitchen, we were feeling euphoric and hungry. Sous Chef Zalakain sat us down at a quiet table in the spacious main dining room and handed us over to the waitstaff. The dining room is sleek and modern, almost minimalist, with white tablecloths and simple flowers on top. Next to us was a happy-looking American couple on their honeymoon.

Elena Arzak came over to say hello and ask if we enjoyed the tour. Did we have any food preferences? My wife explained that she does not eat meat. “What about foie gras?” Elena asked, grinning. She thought about it briefly and nodded—at this place, she would eat it.

The meal begins with an assortment of bites sprung from the most whimsical portions of the Arzaks’ creative minds. A small spiraling bowl of corn soup with black pudding was savory and sweet, the energetic flavors matching the bright colors. Gooseberry and potato chip skewers were served with an explosion of coconut steam made by pouring a coconut infusion over dry ice, a fun presentation for a dish that was more fun than it was flavorful. Fresh sardines were paired with strawberries for a salty, sweet, juicy bite that somehow worked. The chorizo and tonic that I saw Juan Mari preparing in the kitchen earlier on an upside-down Schwepps can was was light and delicious.

The first substantial course was “cromlech and onion with tea and coffee”, one of Arzak’s most iconic dishes. The cromlech are irregular-shaped black and yellow cones that are evocative of moon rocks or perhaps dinosaur tails, filled with carmelized onions and foie gras. Cromlechs are a type of rock found in the Basque mountains, Elena explained, revealing that they recreated the appearance of such stones using turmeric and huitlacoche, the corn mushroom typical of Mexican cuisine. Our waiter instructed us to slip a spoon under one to keep the filling in, flip it around, and eat it like an ice cream cone. I bit into it. The thin exterior was perfectly crisp and the filling was unbelievable, sweet and rich but balanced, in no way overpowering. It was foie gras deployed with finesse and confidence, adding its richness while letting the caramelized onions be the star.

“We always use parsley in our dishes,” Elena explained, pointing to the green garnish on the plate. “The Chinese use ginger. We use parsley because it is from this region.” The parsley had been rendered into a rigid sold and pulverized into a fine dust, which was sprinkled over the plate, somehow retaining its flavor. I dabbed at it with my foie gras ice cream cone. Delicious.

I felt Juan Mari’s hand on my shoulder. “Es huitlacoche,” he emphasized, pointing to the stone black texture of the cromlech.

Meanwhile, the sommelier was pouring us wines. He started us most appropriately with a txakoli, the sparkling white wine served all over Basque country. As I mentioned before, txakoli is normally poured from a great height so that the wine aerates as it falls and splashes against the glass below. In this refined setting, our sommelier (with a trace of reluctance) poured it daintily into a tall glass like a fine champagne. Some whites and reds followed, all of which were very good although they revealed no real attempt at a pairing with the food. They were selected from the giant wine cellar we toured previously, which contains a majority Spanish wines. The wine list offers prices that would seem staggeringly low in the United States; a cultural difference which I always find infuriating back home.

The next course arrived, an egg on a bed of garlic shrimp puree topped with a thin round crisp of green vermicelli. The egg had been cooked for hours at a low temperature. It was ethereal and soft, the yolk oozing to combine with the garlic shrimp, moistening the vermicelli without depriving it of its crispness. The asymmetrical composition was balanced by a single mussel wearing the colors of the corn soup we enjoyed earlier.

A parade of entrees followed. There was buttery lobster meat pulled from the claws and served with mustard vinaigrette. Sole fillets were topped with purple and yellow flower petals and served with deep purple wine-soaked croutons and a creamy yellow sauce. A whimsically presented “Lamb with Corks” arrived, consisting of tender Basque lamb served with perfectly cylindrical buttery potatoes standing upright like wine bottle corks. A stuck-together cork of julienned melon and watermelon lay on its side next to a puddle of red wine reduction.

Best of all was the main fish course: white tuna cooked to medium rare perfection. The fish was fresh, intense and buttery. “This is the fatty part of the tuna,” our waiter explained, “it is in season now so this is the right time to eat it.” The intense richness of the fish was cut by triangles of sweet prickly pear topped with thin red chili threads. A balanced composition of savory and sweet, buttery and crisp and spicy.

The white tuna course embodied one of the things that most impressed me about Arzak. The food is cutting edge, but the Arzaks do not sacrifice flavor to the temple of innovation. High-tech cooking technique and novel flavor combinations are deployed in the service of producing food that tastes better and is more enjoyable to eat. Not all “avant-garde” restaurants can do what the Arzaks do and I’m not sure all of them even try; I thought back to a meal at an avant-garde restaurant back in New York, at which some dishes were transporting and others were simply weird, incorporating ingredients that showcased the chef’s versatility but did not actually taste good.

Another thing the Arzaks refuse to sacrifice is warmth. As dedicated as they are to innovative cuisine and experimentation, the Arzaks are even more dedicated to pleasing the customer. This is not food for its own sake or for the chefs’ own satisfaction; it is food in the service of making people happy. Dining at Arzak is like dining in their home, with Elena and Juan Mari regularly roaming the dining room (“he’s on the move,” my wife would whisper), sniffing wine, and exchanging kisses on the cheek with customers as they exit.

My mind was brought back from wandering by the arrival of numerous desserts. There were bright yellow pistachio and beetroot stones and those candy-covered dessert ladybugs we saw being prepared in the kitchen, sitting next to a chocolate dragonfly. A molten chocolate cake arrived with a candle in it. Somehow they had figured out it was our anniversary.

“My apologies,” our waiter said, “we usually serve the desserts one at a time, but the Arzaks would like to have coffee with you. When you have finished, they will join you in the lounge.”