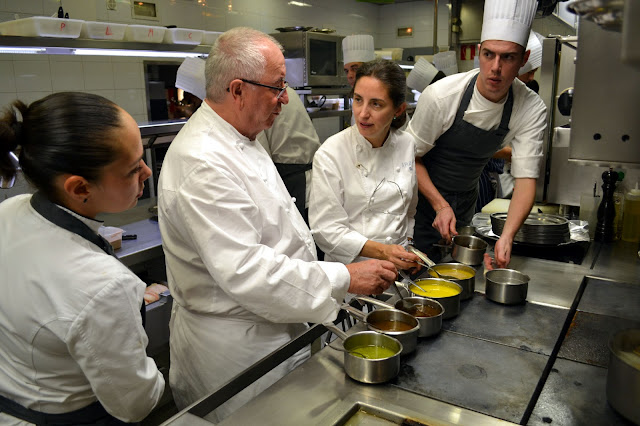 As part of our journey through the Basque Country, we had the pleasure of visiting the world renowned Restaurante Arzak, a three-Michelin starred restaurant in San Sebastian. Run by the legendary Juan Mari Arzak and his daughter Elena (pictured above), it consistently ranks as one of the best restaurants in the world. Arzak is at the forefront of la Nueva Cocina Vasca, the New Basque Cuisine that has influenced chefs all over the world, including back home in New York. This is the first installment of our three-part feature on the Arzaks and their restaurant.
“This food could not be made anywhere else.”

I was sitting in the lounge at Restaurante Arzak in San Sebastian, Spain. Sitting beside his daughter and co-chef Elena, over coffee and cava, the great Juan Mari Arzak was explaining to me the principles of la Nueva Cocina Vasca, the cuisine that he founded and of which he remains the leading inspirational figure. He grew animated as he spoke, his passion for food and culture visibly on display. Although their food incorporates flavors from around the world, he explained, it could not be made anywhere but right here, in the Basque Country.

What did he mean by that? To attempt to answer that question, let me back up a bit.

We arrived at Arzak about four hours earlier and Elena came out to meet us. Recently named best female chef in the world, she displayed the calm confidence of someone who makes everything look effortless. Happy to see New Yorkers with an appetite and a food blog, she was eager to show us around.

She led us through a door opposite the dining room. There, we found a table near the kitchen where her father, Juan Mari, was having dinner with her husband and children. He stood up when we arrived and Elena introduced us, emphasizing that we were from New York and wanted to learn about the restaurant so that we could write about it for people back home. Juan Mari—who needs no new publicity and whose restaurant books up months in advance every day of the year—thought the idea sounded wonderful. “Es un placer,” he said warmly, placing his hand on my shoulder and ushering us toward the kitchen. Elena followed after us. “My father says it’s a pleasure,” she repeated. I could tell from his smile that it was true.

The kitchen walls were designed by Elena’s husband to look like the scales of a fish. In the front, triangles of prickly pear were being fitted with thin red chili threads and sauces of all colors were being stirred, tasted and stirred again. In the back, a pastry chef meticulously applied tiny black candy dots to small red sweet dessert blobs to make them look like ladybugs. To my right, a cook was rolling out neon green pasta dough. Next to him was a large basin full of crab claws waiting for attention. When I turned around, Juan Mari had begun applying chorizo and paper-thin slices of melon to the bottom of an upside-down can of tonic water and Elena was spearing together strawberries with fresh sardines. A brightly colored corn soup sat on a tray next to some yellow-and-black crispy things that looked like dinosaur tails and later turned out to be our second course.

We were introduced to Igor Zalakain, the Arzaks’ sous chef, to give us a tour of the environs. The building feels like a private home, with rustic doorways and wooden staircases. He led us through the wine cellar and up the stairs to the test kitchen, more properly known as the “Innovation Research and Investigation Kitchen.” That is where the Arzaks, along with a team of chefs, dream up cutting edge culinary creations, the best of which will one day make it onto their restaurant menu. Igor described himself as one of the responsables of the Innovation Research and Investigation Kitchen.

There were no chef scientists in lab coats or rows and rows of pots bubbling away. Instead, it looked like a modest kitchen in a private home, in which all of the innovation was done on a single electric stove and the investigation was conducted using a small set of cooking equipment and, to be fair, a few test tubes and a sous vide machine. On the counter we noticed a package of Vietnamese rice paper wrappers, the same ones we have back home, and Igor showed us some that had been crisped and blown up like balloons into hollow spheres—his latest project. We told him we use them to make summer rolls. He nodded knowingly.

Every good investigation chef needs ingredients upon which to innovate, and so for that Igor led us across the hall to the Flavor Vault. One might describe it as the pantry to end all pantries. Floor-to-ceiling industrial shelves are stocked full with perfectly arranged plastic containers filled with all the ingredients an investigation chef could ever want from around the world. Each one is labeled with a control number, the ingredient name, and its country of origin. I spotted piment d’Espelette from our trip across the French border. Igor showed us a container filled with tiny multi-colored candies. “These are from New York,” he explained.

The very best of these innovative creations must somehow make their way from the test kitchen to customers’ plates, and for that the Arzaks use the modest home office down the hall. There, the innovative and imagined dishes are reduced to schematics—detailed recipes with illustrations—which the chefs of the restaurant kitchen can use to recreate each dish nightly, each time as precisely as it was imagined.

Speaking of which, all this investigation was making us hungry. Chef Zalakain led us downstairs to the dining room, where we were seated for dinner . . .

Continue to Part II: The Tasting Menu at Arzak.