Tacos Matamoros is a fine spot for inexpensive tacos and a transporting atmosphere in the Mexican area of Sunset Park, Brooklyn. The large cafeteria-style dining room is packed with families enjoying a casual night out. Fathers and sons sit side-by-side as they watch liga Mexicana soccer on the big screen and enjoy $1.50 tacos al pastor with tropical drinks. 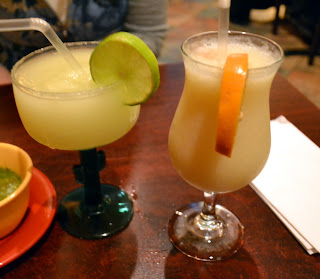 I say “transporting” because, for me, something about it felt like vacation. The decor and ambiance were distinctly more Mexican than American, and the piña colada in my hand almost persuaded me that there was a beach nearby. There is no beer served, although they do not mind if you bring it in, so most of the guests are sipping frozen margaritas, piña coladas, and other tropical drinks — a scene not often found in a city of sophisticated cocktails and a borough of craft beer drinking.

Despite my skepticism of guacamole in restaurants these days (even the “good” stuff being merely average, in my book, and $12), I couldn’t resist starting with a $5.50 bowl of it that came with serious chips. It was really nicely done; smoother and creamier than I do it, with the avocado partially pureed, and overall not a waste of money, which is about the highest praise I could give an order of guac. It just needed to come faster, the whole point of guacamole being to keep hunger at bay whilst awaiting the main event.

The menu is huge, like a Mexican version of diner menu. There are soups and salads and entire sections devoted to chilaquiles, enchiladas, burritos, tacos, tortas, cemitas, tostadas, fajitas, tamales, and sandwiches. There are also larger plates, like grilled skirt steak with peppers and onions and chicken with mole poblano. Looking around, everyone seems to have a different ordering style.

But for me, it’s all about the tacos. Matamoros serves the small authentic type, each one on two soft corn tortillas with simple ingredients topped with fresh chopped onion and cilantro. A highlight was the simple carne asada, with char-grilled marinated beef that needed no more than a squeeze of lime. I couldn’t resist the crumbled Mexican chorizo, which was nice and spicy and not too dry, but I found the taco a little one-note. What it really need was scrambled egg, a combination that blew me away during my trip to Detroit. The taco al pastor, on the other hand, was perfect: juicy slow-roasted pork, some pieces seared crisp on one side, with good heat and a hint of sweetness. It wasn’t listed on the menu, but our waitress made sure I didn’t miss it. You should make sure of that, too.

Disappointments included the larger fish taco, which was made with overcooked salmon, and a carne enchilada taco of spicy marinated pork that was overwhelmed by heat. A vegetarian taco of refried beans, rice, lettuce, pico de gallo, onions, cilantro, queso fresco, and sour cream was fantastic, a beautiful and refreshing contrast to the spicy meat-laden tacos that fill out the rest of the taco portion of the menu.

Of the non-taco options I thoroughly enjoyed the shrimp ceviche tostada, served warm with fresh lime, red onions, tomatoes, cilantro, avocado, and a chipotle crema over a crisp corn tortilla. The folks at Matamoros do a good job keeping the tostada crisp even against the moisture of the ceviche.

I wouldn’t think to mention the dessert options, except that a slice of “cappuccino cake” was shockingly good. It was simple, light, and airy, with a milk chocolate filling and a dark chocolate glaze on top. In the end, our satisfying meal for two, with tropical drinks, came to about $30, and there’s something sweet about that too.