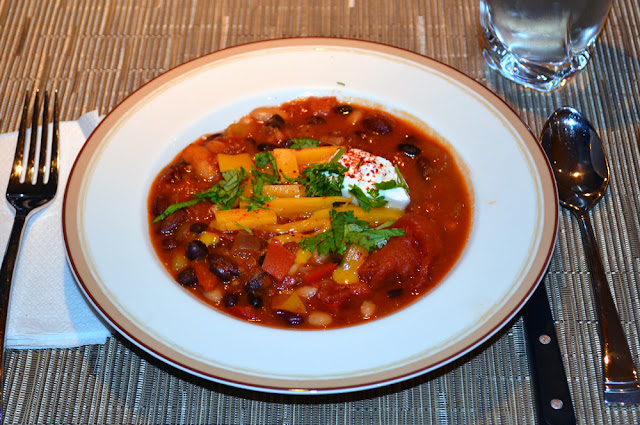 Thinking back on my time in the French Basque Country, I was most inspired by the axoa, a traditional ground veal dish from the town of Espelette similar to a cross between sausage and peppers and texas-style beanless chili. I wanted to make a vegetarian dish inspired by the axoa, so I chose a three-bean chili with bell peppers incorporating piments d’Espelette, the ground Espelette pepper that I purchased at its source. Whereas the jalapenos and serranos I usually employ in chili pack a strong lip-burning heat, Espelette pepper has a mild tongue-tingling heat that gives it a distinctive character.

Chili is a terrific dish for fall and winter. It is warm with flavor and spices and takes little effort beyond leaving it alone to simmer. This vegetarian chili is as hearty as any meat-based version and packs some serious flavor. Top it with shredded cheddar cheese, sour cream or yogurt and, if you have it, a generous sprinkling of Espelette pepper. If you can’t find Espelette pepper, spicy paprika makes a nice substitute or use your favorite source of heat.

2.  Drain and rinse the beans and add them to the pot along with the tomatoes. Bring the chili to boil, reduce the heat and simmer, covered, for 45 minutes. Serve the chili topped with shredded cheddar cheese, sour cream or yogurt, cilantro and a sprinkling of Espelette pepper.