Detroit is a fascinating place. It has beautiful architecture, a rich history and world-class art, including a stunning collection of floor-to-ceiling frescoes by Diego Rivera. Yet much of the city is deserted. Built for three million people, it housed about two million at its peak in the 1950s and now is left with only 700,000. Vast parts of the city are empty. Many areas feel post-apocalyptic, with beautiful homes, churches and schools that have been abandoned, their windows missing, anything of value ripped out by scrappers. Fortunately, all of that makes Detroit an even more interesting place to visit.

So does the food. A recent weekend trip allowed us to sample many of Detroit’s fine culinary offerings, including authentic tacos in Detroit’s “Mexicantown” and fantastic Middle Eastern food in nearby Dearborn. We were aided in that endeavor by a young entrepreneur, Andy Didorosi, whose Detroit Bus Company offers a cheap, easy and fun way to sample the city’s finest bars and restaurants with an evening of unlimited hop-on-hop-off privileges (and food recommendations) for only $5. He even let us enjoy some beers on the bus and gave us the use of his megaphone.

Like Chicago, Detroit has it own beloved take on the hot dog: the “Coney Island”. The Coney is an all-beef hot dog topped with all-meat beanless chili, raw onion and yellow mustard. It is not to be confused with a mere “chili dog”, which is the more general name given to a hot dog topped with any kind of chili.

It is impossible to eat a Coney Island dog without making a mess. The hot dog itself is lightly grilled and is topped with the chili, which is sweet and creamy. The bun tastes more like white bread than the average hot dog bun, which is good because its main function–and it’s a pretty important one–is to sop up the chili that is bound to slip off the top as you eat. The onions and yellow mustard add a distinctive character. We ordered some fries as an accompaniment, which proved useful for going after the chili that the bun didn’t catch. Washed down with some Labatt Blue, it made for a satisfying meal.

Slows was held out to us as one of the top places to eat in Detroit. Located behind an easy-to-miss door on Michigan Avenue, it has become one of the few destination restaurants in the city, according to a recent report by the New York Times. Arriving late, we found a comfortably casual feel with welcoming decor and a laid back scene at the bar.

The menu offers classic barbecue options like brisket, pulled pork, and both St. Louis-style and baby back ribs. The portions are generous and each entree comes with two sides; favorites like cornbread, baked beans and, of course, mac-n-cheese. Four entrees with eight sides and a round or two of beers comfortably fed eight hungry guys.

Unfortunately, the food was disappointing. The meat was fine but most items were too dry. To be fair, we arrived late in the evening and perhaps some slow-cooked items had sat too long. But given the high praise from every direction, we expected better. The notable exception was the baby back ribs, which were nice and tender and were the best dish of the night. If no one were looking, I could contently have a plate of those and a beer for dinner any night of the week. 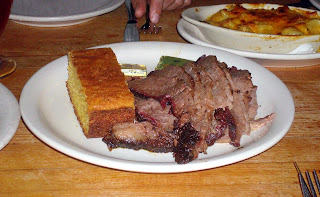 To spice things up, Slows offers four kinds of barbecue sauces: spicy, sweet, apple and North Carolina-style. The sauces were tasty and helped compensate for some of the dryness of the meat, but they were nothing special. My favorite was the apple, which had some nice complexity, and mixed effectively with the spicy sauce for added kick. It was fun to mix and match.

Sides were “meh”. Mac and cheese is always delicious, of course, but theirs was uninspiring and had funny seasoning. The most interesting was a cheese dip for French fries that was so viscous it stuck to the serving dish even when held upside-down. The last to finish his beer had to eat a spoonful of it.

On the bright side, Slows does have a terrific beer selection. Local craft beers of many styles are served alongside a few carefully selected brews from overseas. In the end, that helped make for a satisfying evening of good friends, good beer, and piles and piles of meat.

On a great recommendation from the guy at Detroit Bus Company, we stopped by Taqueria Lupita’s, an authentic spot in Detroit’s expansive “Mexicantown“, offering $1 tacos. The tacos were varied and traditional. They were small, each one on two soft corn tortillas, topped with simple but quality ingredients. They were accompanied by a platter of four kinds of salsa and lime wedges.

Some of the fillings were unexceptional, like steak that was nicely seasoned but too well done. Others were excellent. Chorizo with egg was a standout, with complex flavor and a nice marriage of textures. Tacos al pastor, with pulled pork, were nice and juicy. Pork jowl was meaty with a light sweetness and a pleasingly springy texture. The tacos were simply presented and topped with fresh cilantro and onion.

Starters were a mixed bag.  The ceviche tostada – another great recommendation from Detroit Bus Company – was a great way to begin. It had a tangy citrus flavor and somehow the tostada remained crisp even against the moisture of the ceviche. Queso flameado (“flamed cheese”), on the other hand, was too greasy. Melted cheese with grease is delicious, of course, but you feel dirty eating it.

Tacos are fantastic with beer, as everyone knows, but at Lupita’s you won’t find it. They don’t sell alcohol and won’t let you bring it in. That was too bad, but fortunately we had beers waiting for us back on the bus.

The next morning, we were fortunate to stumble upon some excellent crepes at Good Girls Go to Paris, a crepe shop that has locations in Midtown and Grosse Pointe. The handmade crepes are folded into triangles and stuffed with sweet or savory fillings. I opted for the “Jeanette”, a savory crepe filled with prosciutto, fresh mozzarella, tomatoes, olive oil and herbs de Provence. The classic combination of flavors made for a great breakfast, the saltiness of the prosciutto tempered by the sweetness of tomato, the fruitiness of olive oil and the creaminess of mozzarella. The crepe itself was nice and crisp. 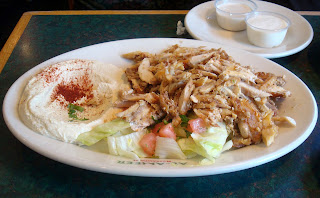 A drive out to the Henry Ford Museum gave us the opportunity to sample the excellent Middle Eastern food to be found in Dearborn, Michigan. After some research, we decided to stop at Al-Ameer, a casual and authentic spot with locations in Dearborn and Dearborn Heights. We were glad we did.

From the large menu, we followed our waitress’s advice and ordered a plate of falafel and two platters of shawarma, one of chicken and one of lamb and beef. As we waited, we grazed on a dish of pickles and hot peppers. The pickles were nice and vinegary, not at all sweet; quite different from American pickles. A salad arrived that was nothing out of the ordinary. It was quite lemony, setting up a nice contrast to the sweetness of the tomatoes; uninteresting on its own but a good accompaniment to the shawarma. 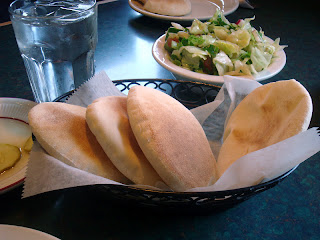 The falafel was spectacular. It arrived piping hot, crispy on the outside and soft on the inside, seasoned perfectly. It was served with a simple salad, more pickles and a creamy yogurt sauce on the side. Shawarma was a knockout. It was beautifully seasoned and tender, yet with a crispness on the outside that other shawarmas I have tasted have not delivered. The shawarma was served with dishes of garlic sauce and tahini, letting you mix and match the flavors. After some debate, we decided that the lamb was a touch better than the chicken.

The reasonably priced dinner platters come with soup or salad and a choice of hummus, rice or fries. The hummus is a nice accompaniment to the homemade pitas, which come out warm and puffy, floured on the outside and with a hint of sweetness. But forced to choose I would go for the rice, which, although simple, is the perfect vehicle for polishing off any excess garlic sauce or tahini from the schawarma platters or for mixing in with the meat for a satisfying bite. Fortunately, having ordered two platters to share, we did not have to make that decision.

Further reading:  See our other Beyond the Five Boroughs features on Chicago and New Orleans. Find us on facebook!

View The Foods of Detroit in a larger map