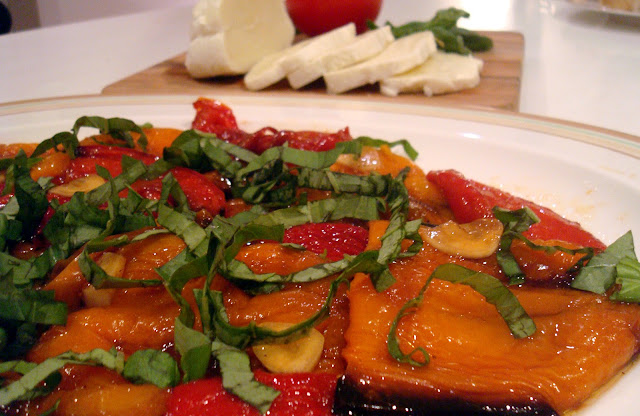 My father used to make a big to-do out of roasting peppers. First he would cut the peppers into quarters and roast them in the oven, brushed only with a little vegetable oil. Meanwhlie, he would prepare a simple marinade of extra virgin olive oil, vinegar and sliced garlic. When the peppers were done, he would peel them and leave them to soak up the marinade overnight.

Although the process is simple, the results are extraordinary. The peppers take on a delicious sweetness, which is balanced by the tartness of the vinegar, the bite of the fresh garlic and the fruitiness of the olive oil. The peppers comfortably stand on their own, topped with some sliced or torn basil. Or if you prefer, add them to a salad or sandwich or pair them with fresh mozzarella.

There are no quantities for this recipe. Use as many peppers as you feel like roasting. (8 peppers with 5 cloves of garlic made a good starter at a recent dinner party for 11.) For the marinade, I use a ratio of approximately 3 parts olive oil to 1 part vinegar. 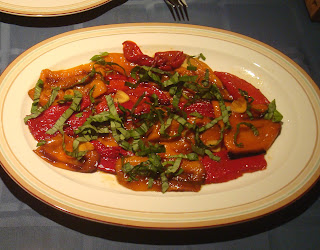 1.  Preheat the oven to 425 degrees. Slice the peppers into quarters, removing the pith and seeds. Brush the peppers with vegetable oil and arrange them in a single layer on a sheet pan. Roast them for 40 minutes, turning them once half-way through. Do not worry if the peppers get charred.

2.  When the peppers are finished roasting, remove them from the oven, let them cool slightly and, with your hands, remove the papery skins. 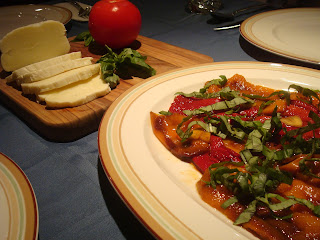 4.  Cover the peppers with plastic wrap and set them in the refrigerator to marinate overnight. Turn them every 12 hours or so to ensure that they marinate evenly.

5.  To serve, bring the peppers up to room temperature and arrange them on a platter, alternating among the various colors. Top them with sliced or torn basil.