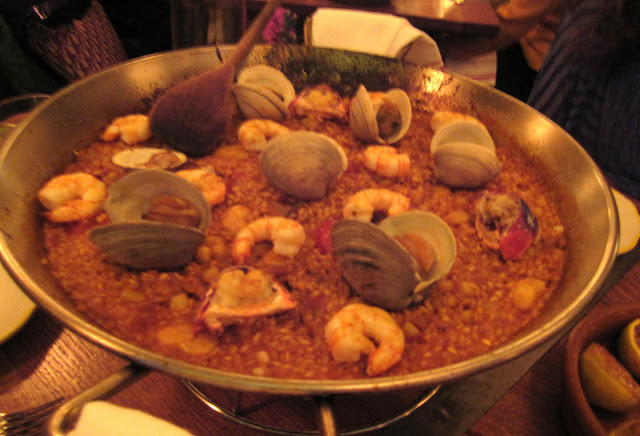 The smell of Tertulia’s wood burning oven greets you at the door. The whole place smells faintly of a fireplace, evoking memories of sipping red wine while listening to the sound of logs crackle and burn. But it is not the smell of the wood oven that makes Tertulia stand out; it is what they cook in it.

Paella. Not the combination of dry yellow rice with seafood and vegetables that many restaurants (including many expensive restaurants) market as paella. This is paella como Dios manda – as God commands it to be done. The short-grain rice is creamy, almost like risotto but not quite, with that prized crispy-almost-burnt crust on the bottom that the Spanish call the socarrat. The color is closer to red than yellow. It has the floral scent of saffron, the smokey flavor of pimentón and the fruity finish of quality extra virgin olive oil. It is filled with sepia and topped with clams, sweet shrimp and buttery pieces of lobster.

As is the trend in many newer restaurants, Tertulia firmly rejects the entree. The menu consists of smaller plates and only three platos familiares (“family-style dishes”), which are larger plates to share. With three people, the paella and five of the smaller plates left us full and satisfied.

Any meal at Tertulia should begin with the fabulous pan con tomate (“bread with tomato”), crusty bread rubbed with garlic and topped with pureed fresh tomatoes, moistened with fruity extra virgin olive oil. I’ve had this dish all over Spain, and Tertulia’s version is about as good as it gets.  Ours arrived paired with the tosta setas (“mushroom toast”) with smoked ricotta and pine nuts. The mushrooms had a nice texture but were secondary to the ricotta, which was fresh, milky and only mildly smoked. A more or less successful snack that suffered from having to compete for our affection with the pan con tomate.

The delicious tosta huevo roto y jamón Ibérico (“toast with broken egg and Iberian ham”) offers about as much Spain as could be packed into a single bite. The Spanish love for ham is well known, even in the United States, but less widely appreciated are their obsessions with eggs and with potatoes fried in olive oil. The combination evokes the classic Spanish tortilla, which is not so much an omelet as a savory cake made of roughly equal parts potato and egg, cooked in abundant olive oil. Here, smashed potatoes are layered with boiled egg atop a toast, and the whole thing is topped with thinly-sliced Ibérico ham. It tastes powerfully of olive oil but is not at all greasy, and the fruitiness is balanced nicely by the saltiness of the ham.  The toast is perfectly crisp.

The big disappointment of the night was nuestras patatas (“our potatoes”), which were too crispy (if you can believe it) and tasted of nothing but heat – and too much heat. I was particularly dismayed given my love of patatas bravas, the classic Spanish fried potato cubes with spicy tomato sauce and garlic aioli that one can find in virtually any bar de tapas in Spain and are replicated with reasonable success elsewhere in New York (like at Meson Sevilla, where they are quite good even if not entirely traditional). Patatas bravas are fairly straightforward to make correctly, and Tertulia’s attempt to modify the classic fell disastrously short.

Another dish I’d skip is the smoked bar jack with vegetables. The fish was nicely cooked and buttery and the vegetables were tasty, but the portion was too small and for $19 we felt ripped off.

The wine list had a wide range of Spanish wines, but it was very pricey for such a casual restaurant. There were hardly any bottles under $40 and very few under $50.  The least expensive glass of wine was $13, which is threatening to become the new norm in Manhattan.  Feeling adventurous, we opted for a carafe of the “house wine” on tap, which yielded about three unexceptional glasses and set us back $25 ($40 for a bottle).

All this was quickly forgotten when the paella arrived. Having lived in Spain, I have had many great paellas, but very few of them have been in restaurants, whether in Spain or in the U.S. I think there are several reasons for that. First, the ingredients are expensive. Saffron, which is tediously hand-picked from crocuses, costs about $10 per gram in the U.S. and is expensive even in Spain. Spanish short-grain rice is hard to find in the States and long-grain rice, which is just as wrong for paella as it is for risotto, is cheaper. Second, the process for making paella does not lend itself to mass production. It is easy to keep a vat of yellow rice on hand, but true paella has to be cooked to order to achieve the right texture. Finally, customers in the U.S. – and tourists in Spain, where locals tend not to eat out very much – are not very discerning about paella, letting restaurants get away with calling something “paella” that is really just arroz con cosas (“rice with things”). (Just ask yourself how many Italian restaurants in New York could profitably serve “risotto” that was dry and made from long-grain rice.) New Yorkers are only beginning to discover the treasures of Spanish cuisine, and with the rise of places like Tertulia, which gets all of this right, I think (and hope) that those times will soon come to an end. Cost-cutters, beware!

A word about dessert. Our waitress oddly tried to dissuade us from ordering the torrijas, but we were undeterred.  And our persistence paid off. The Spanish cross between French toast and bread pudding was terrific, crispy on the outside and gooey on the inside, paired with homemade hazelnut ice cream.

In sum, Tertulia offers an excellent meal that reminds me very much of Spain.  If nothing else, it offers one really terrific paella.