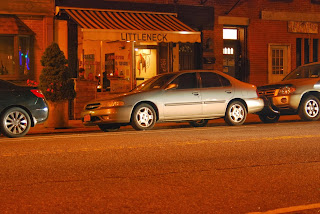 Littleneck is the quintessential urban seafood shack. The interior practically exudes Brooklyn dining, with its nautical doodads, exposed brick on one wall, wainscotting on another, and a chalkboard of specials. A seafood shack just a stone’s throw from the perennially polluted Gowanas Canal might seem like a bad idea, but the throngs of hipsters and Brooklynites who fill the place every night don’t seem to care. Fortunately, Littleneck does not source its mollusks and bivalves from that waterway.

Littleneck was famously started by musicians using Kickstarter, the popular crowdfunding platform. The small menu is dominated by the two best items: the lobster roll and a fried full belly Ipswich clam roll. Different and changing dishes made with mussels and oysters are also offered.

Littleneck is part of a nascent Gowanus restaurant scene. There are two other excellent restaurants on the same block – Runner & Stone and the recently Times-reviewed Pines. If you’re looking for a new area to check out, head to Gowanus.

Our meal started with a sample of their fine selection of east and west coast oysters, paired nicely with their unpretentious craft beer selection.

We also went with a special of butter poached Pemaquid oysters that were dusted with espelette pepper, my favorite Basque-country spice. The plump oysters melted in my mouth, before I was hit with the spicy espelette. A great dish. Oddly, the dish was cheaper than getting the oysters on their own – but  I was not one to complain.

No meal at Littleneck is complete without ordering the lobster roll and the Ipswich roll. The lobster roll has large meaty lobster pieces, with nothing but a slick of homemade mayo added to keep it inside a griddled split bun. It’s a purist’s lobster roll, with no added spices or garnishes, other than some lemon. It’s excellent, and at $18, a good deal. For me, though, I am still partial to the Red Hook Lobster Pound’s roll, which has some added spices, celery, and scallions to enhance the lobster.

The Ipswich roll, topped with a spicy tartar is great, with huge fried full belly Ipswich clams bursting from the roll. The clams easily show through the batter, which is nice and light, though could be crunchier.

I was also pleased with a special of littleneck clams with chorizo, potatoes, and a spicy broth, though, as always in life, there could have been more chorizo.

For dessert, Littleneck offers a simple selection of pies. The end of summer peach had just enough sweetness to finish the meal off right.

The staff is friendly and attentive, though seemingly a bit overwhelmed by the throng of hipster-looking locals – or local-looking hipsters? I can never tell.