Patsy Grimaldi is back at 19 Old Fulton Street, serving coal fired pizzas from the same location that housed Grimaldi’s for decades. Grimaldi has had a hard time with his name. His first lost the rights to use his first name after a lawsuit filed by Patsy’s pizza. Then he lost the use of his last name after he sold Grimaldi’s to a customer in 1998. After a persistent landlord-tenant dispute forced that restaurant to move down the block, the 81 year old Patsy Grimaldi moved back to the original location, but with the new name, Juliana’s, named after his late mother.

Here’s my first look at Juliana’s, which only opened less than two months ago. 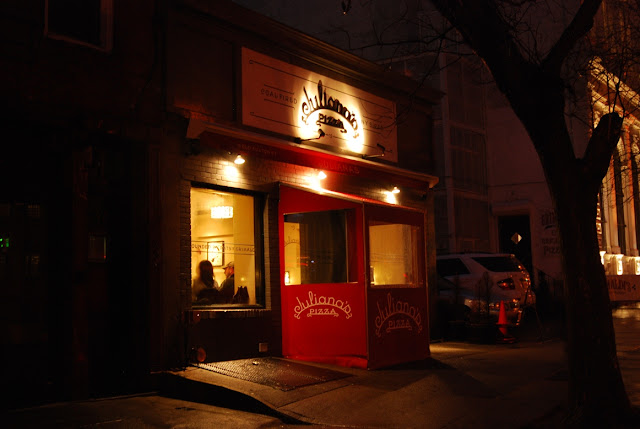 It’s clear that Grimaldi has opted for a more pleasant dining experience at Juliana’s than at Grimaldi’s, which was known for its cramped quarters and brusque service. Juliana’s has a modern look with appropriately spaced out tables and friendly service. The restaurant is also more upscale than Grimaldi’s — while many standard pizzas and toppings exist, there are also some unusual ones for pizza like smoked salmon and pistachio pesto.  (The prices are also more upscale, with many pizzas hitting the $20 range)

Patsy Grimaldi and his wife pace the restaurant, exchanging pleasantries with the patrons and occasionally offering espressos.

The crust on the pizza is thin, with a slight chewiness. The bottom has a noticeable char from the coal, which imparts a smoky flavor. I tried a pizza on special the night I went, which had cherry tomatoes, buffalo mozzarella, roasted garlic, and sea salt. The cherry tomatoes impart a sweetness that contrasts with the garlic and saltiness from the cheese. This classic combination will satisfy the pickiest pizza aficionados in the city. I wouldn’t say it’s the best pizza in the city, however, but it certainly holds it’s own.

A fried calamari appetizer was also good. It wasn’t greasy and had a nice crunch, without it being too bready.

Finish the meal with an absolutely fantastic cannoli made by Patsy Grimaldi’s wife. The cream was light and bursting with flavor, without being overly sweet. The shell was crisp but not crumbly. A perfect dessert.