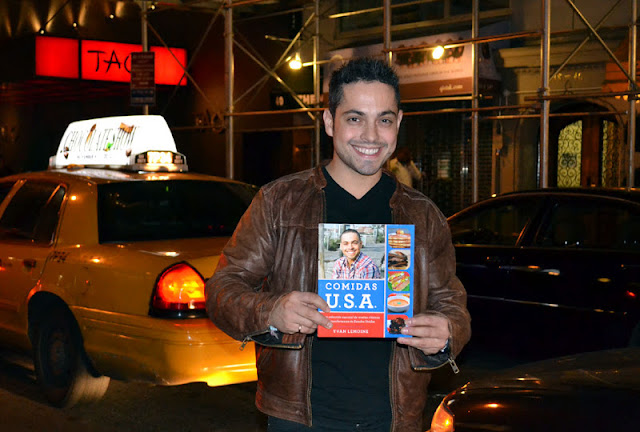 Welcome to the U.S.A.! Let me tell you about our food.

Those were the words that came to mind the first time I picked up Comidas U.S.A., the new cookbook by Yvan Lemoine. The first thing you notice about the book is its patriotism. The color scheme is red white and blue, and the book is loaded with photos of Yvan wearing classy red-white-and-blue clothing and enjoying good food in the company of friends and family. The book offers all of the classics: barbecue chicken, Reuben sandwiches, New England clam chowder, Caesar salad, grilled cheese and tomato soup. 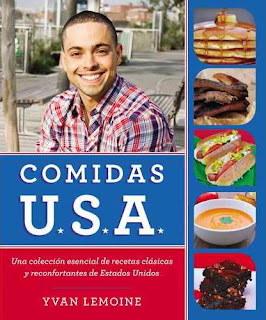 Many of us know Yvan as a finalist on Next Food Network Star, where he distinguished himself with his bright smile, enthusiasm and family-style cooking. Meeting up in person, he had more of an edge to him than I expected. His bright smile was balanced with an urban sophistication that only made his passion for life and food come off more genuine. “Cooking is about making people happy,” he said, ordering us some wine, “if you want to cook good food, you have to eat good food.”

We had met at Lavo, an Italian bistro and nightlife destination from the group that gives us Tao and Arlington Club and serves as a springboard for some of Yvan’s latest endeavors. Over a few glasses of good red wine, we shared ideas about food, travel, life and, of course, his book.

For me, the book evokes images of an immigrant arriving in the United States with dreams of considering himself an American, realizing that one of the first steps toward becoming an American is to cook like one. For Yvan, who came to the United States from Venezuela at the age of 13, that story hits close to home. “This is a book about the food that I fell in love with,” he told me.

The book is divided into chapters ranging from soups and salads to cocktails, snacks and desserts. There are breakfast staples like pancakes, granola parfait and eggs Florentine and a chapter on sandwiches that includes the Reuben, the Philly cheese steak and the po’ boy. Entrees feature the likes of chicken and waffles, roast beef, tuna casserole and Thanksgiving-day turkey. There are four kinds of barbecue sauce for ribs and all the fixin’s, including corn bread, cole slaw, potato salad and, of course, mac’ and cheese

The recipes are straightforward and classic. There are no twists: pancakes are pancakes, barbecue chicken is barbecue chicken. That was the goal, Yvan said, the book is meant to be “simple and straightforward – what I’ve learned about what American food is.” The recipes are “unfiltered by me,” he said, not his spin on anything, but simply his “best interpretation of standard, classic everyday comfort food.”

Some of the recipes are simple, like broccoli soup made with four ingredients or a basic chicken salad. Others, like an elaborate surf n’ turf preparation, are quite involved. Some of my favorites are the ones we might not even think of as classic American foods until the book reminds us that they are: Cobb salad, eggs Florentine, pastrami on rye. The instructions are simple and easy to follow, and many have full-color photos.

His other goal was to build a bridge between immigrant parents and their children. “This is a book for moms,” Yvan explained, “moms who come to this country as immigrants and their kids are American.” Growing up in the U.S., he said, you want to eat what your friends are eating. But when kids come home from school asking for strange foods like “tater tots” (page 33) and “mac and cheese” (page 64), their families don’t always understand. The book is his answer to that problem, he said: “a bridge between their kids and their cultures, so that parents can say ‘OK, I’ll make you that.'”

To that end, each dish is titled in Spanish, but underneath is the proper American name in English. Creative translations that caught my eye include “salchichas arropadas” (pigs in a blanket; i.e., “clothed sausages”), “sandwich de queso y carne a la Filadelfia” (Philly cheesesteak)  and “costillas gigantexas” (Texas beef ribs), a play on the Spanish adjective “gigantesca” for “giant”.

So I had to ask him: what is American food? It is hard to define, Yvan admitted, but ultimately American food is immigrant food. It is derived from the cultures that influence America, and many of our regional specialties are drawn from the people that settled in each region. Mexican influence in Texas gave us chili con carne (page 114). Creoles in Louisiana gave us jambalaya (page 126) and gumbo (page 119). Italians in New York added tomatoes to a New England cream based soup to create Manhattan clam chowder (pages 122-123). Each of the book’s recipes is introduced with a historical note, explaining the origins of the dish and its cultural significance. Yvan will rattle off many of those facts without notes.

Many of our foods have precedents somewhere else, Yvan explained, but once we get our hands on them, we make them our own. Thus, “Apples from China turned into pie. Potatoes from Peru became french fries. Deep dish pizza, Genero Tso’s chicken”, he said, “these are American foods.”

This, in Yvan’s view, means American food has the most space for growth. “You can take anything and make it into American food,” he said. I thought about the diverse restaurants opening up these days that are emphatically American restaurants: Mission Chinese, Empellón Cocina, Parm. These fine establishments certainly each have an ethnic heritage, but their food could only have come about here, in the U.S. of A. This is not “fusion” – it is American food. We have made it our own.

But first, we have to start with tomato soup with grilled cheese. For that, I’ll be turning to Comidas U.S.A.