This is the fourth entry in our Beyond the Five Boroughs feature on Vietnam and Laos. The first explored Hanoi street food, the second Lao street food in Luang Prabang, and the third the cuisine of the enchanting city of Hoi An 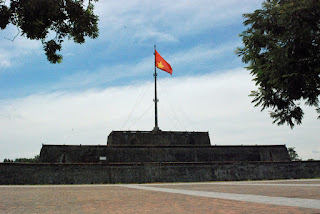 The imperial city of Huế in Central Vietnam is an illustration of contrasts. Beautiful restored palaces and pagodas sit alongside rubble and destruction from two wars. Great food from the city’s glory years during the Nguyen dynasty co-exist alongside garish tourist traps. A massive communist flag rises above the Imperial Palace serving as a reminder for the country’s unification and the power of the state, which summarily executed thousands of citizens when the Viet Cong controlled the city for 3 1/2 weeks in 1968. After that conquest, American and South Vietnamese forces ferociously bombarded the city, leveling neighborhoods, and using napalm on the Citadel — leading to the infamous (though disputed) quote by an American soldier that they had to “destroy” Huế “in order to save it.”  While the Battle of Huế was technically a victory for the Americans, the carnage had a corrosive effect on American public opinion, accelerating the end to the war.

Ravaged by two Indochina wars, one can still imagine the beautiful city that Huế used to be. The Imperial Enclosure in the center of the Citadel housed Vietnam’s capitol beginning in the early 19th century until the 1950s — but only 20 of its 148 buildings survived the two wars. A large-scale restoration effort is taking place and one can only hope it can restore as much of the Citadel as possible.

We can thank Emperor Tu Duc (1829-1883) for the city’s great food. A notorious narcissist, along with having 104 wives, he reportedly demanded a different meal every day for a year. The result has led to creative and bold, spicy dishes, including many that are completely absent from Vietnamese restaurants back in New York.  In particular, the city is known for bún bò Huế (a spicy beef noodle soup); cơm hến (spicy tiny clams with peanuts, rice or noodles, and clam broth); and bánh bèo (delicate race cakes with a variety of toppings).

A necessary introduction to Huế cuisine can be found at numerous excellent street stalls and restaurants in Dong Ba Market.  Towards the back of the market you’ll find women cooking exotic soups, noodle dishes, grilled pork, and steam rice cakes. In some of the more established stalls, there will be study stools and a counter so you can eat in (relative) comfort; other stalls have only tiny plastic stools, and sitting means enduring the hectic environs.

The vendors speak virtually no English and so you must rely on the pointing method to order.  Since each vendor sells only one or two dishes — usually out of big steaming pots cooked over makeshift charcoal grills — it is often unclear what the dish you ordered is going to be.  I enjoyed excellent bún bò Huế — spicy beef and oxtail noodle soup, glowing orange from annatto seeds. The broth, actually a mixture of beef and pork stock, is scented beautifully by lemongrass and shrimp paste. The bold flavors — and spice — hit me immediately after the first spoonful.

There were other interesting dishes at the stalls and I’m still unable to identify them — anyone know?  One noodle dish (photo above) was yellowed with curry paste and topped with brisket as well as what looked like pig knuckles, and then a very spicy dark red chili paste on top. The combination of curry, spice, and numerous herbs was another strong-flavored dish that I enjoyed, though certainly not for the faint of heart.

Another soup had thin, almost angel hair noodles, and a spicy fish broth along with what appeared to be beef meatballs. This soup was more subtle and gave my taste buds a break after the curry noodles.

The market also had a large number of vendors selling desserts and drinks. My favorite drink was nước mía – a fantastic drink with fresh sugarcane juice and a little citrus (I believe from kumquats). Huge whole sugar canes are pressed to order and then combined with the kumquat juice, which nicely cut the sweetness. You’d make a fortune bottling this drink and selling it in the United States.

Huế cuisine also makes good use of rice cakes, either steamed and topped with various toppings or steamed in a banana leaf. One particularly good preparation of steamed rice cakes — called bánh bèo — can be found at Lien Hoa, one of the city’s numerous excellent vegetarian restaurants. The delicate cakes are topped with fried shallots, crumbled bean curd, mushrooms, and carrots. A bowl of spicy fish sauce accompanies the dish.

Another great example of Huế cuisine was a banana flower salad with chicken and shrimp at Ngo Co Nhan, a huge two-floored restaurant within the Citadel. A banana flower is huge, red, and blossom-shaped, and is found at the end of banana clusters on banana trees. It has a delicate, crunchy taste, somewhat similar to an artichoke. It’s fantastic in a salad.

Perhaps the best example of Huế cuisine is cơm hến – the spicy clam and rice noodle dish. Many restaurants on Truong Dinh street specialized in it so head over there to try it. The little river claims are combined with peanuts, sesame seeds, crispy noodles, and numerous herbs.

A hot clam broth is served alongside — it’s unclear whether you’re supposed to drink the broth or pour it onto the dish. The non-verbal communication with the staff was less than clear. I spooned some on top of the dish, and found it to be awesome. The little clams taste more like mussels than what we think of as clams; and I enjoyed the combination of textures – soft clams and rice noodles with crunchy noodles and peanuts. One of the best dishes I had in Vietnam.

In the end Huế is worth visiting for 1 or 2 days for a tour of the Citadel and an exploration of some really inventive cuisine you can’t find anywhere else. It is a shame that the few Vietnamese restaurants in New York stick to Northern and Southern Vietnamese dishes – but I’ll keep a look out to see if any offer cơm hến, bún bò Huế, bánh bèo, or nước mía.

Make these dishes at home or travel there yourself!

Beyond the Five Boroughs feature on Vietnam and Laos. The first explored Hanoi street food, the second Lao street food in Luang Prabang, and the third the cuisine of the enchanting city of Hoi An" />