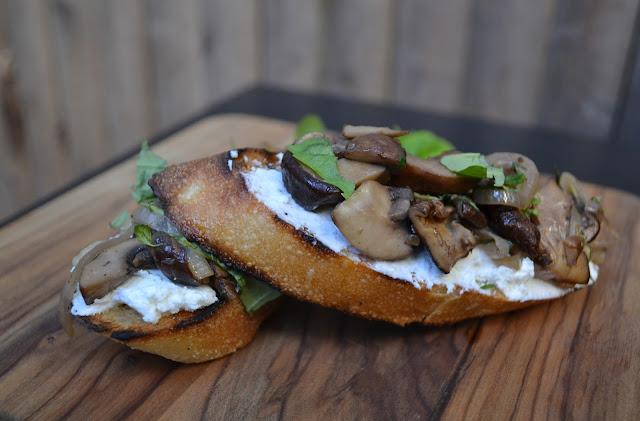 Late summer is a great time for a party. The weather is warm and sunny, and the food coming up from the ground is fantastic. So this weekend my wife and I threw a party in our new garden, giving it an Italian theme in honor of our recent trip to Italy (food stories forthcoming). The theme went nicely with the season’s bounty: the juicy tomatoes, the fresh veggies, the bright green herbs.

A batch of mushroom and goat cheese crostini were nice and crowd pleasing, and also easy for us. I spent a few minutes before the party grilling slices of bread (although I could have used the broiler or toaster oven) while my wife sauteed up some mushrooms with shallots. We spread on some goat cheese for creaminess and topped it off with fresh herbs from the garden. 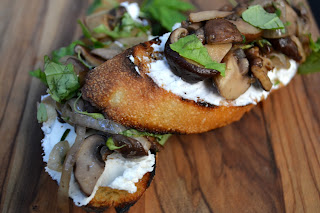 1. Preheat a grill or broiler. Pour some olive oil into a bowl. Slice the baguette on a diagonal into medium-width slices.

3. Heat a large saute pan over medium heat. When it is hot, add some olive oil and the shallots. Saute for two minutes, stirring occasionally, until the shallots begin to soften. Add the mushrooms, the leaves from the thyme sprigs, and half of the chives or parsley. Cook everything together until the shallots are translucent and the mushrooms have softened but retain some body. When they are nearly done, raise the heat to high to cook off any remaining liquid. Remove from heat and stir in the remaining chives or parsley, leaving a little for garnish.

4. Spread some goat cheese on a slice of bread. Spoon on some of the mushroom mixture and top with chives or parsley. Repeat with the remaining slices and serve. 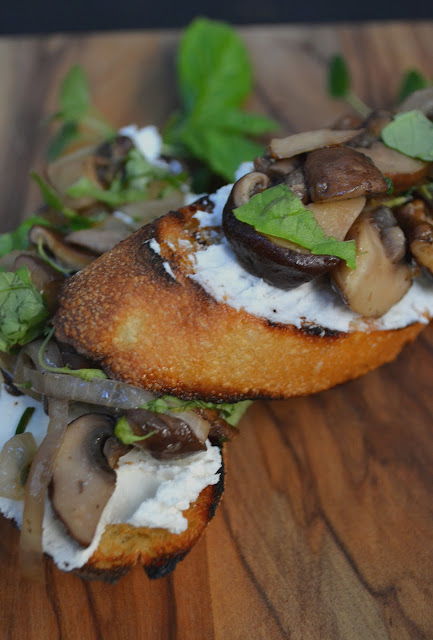